Known for their voracious appetites, these Arctic birds have so much trouble walking that they take off better from the water than the land

Location: Eastern coast of North America down to Gulf of Mexico. Crosses across the Northern Arctic to the west coast of Europe down to northern coast of Africa.

How do Northern Gannets feed?

Northern Gannets dive at the water like an arrow at tremendous speeds of up to 100 km per hour. Their bodies are built to withstand the impact with an especially strong sternum.

They are able to spot prey when they are as high as 45 km above sea level, though 10 to 20 metres is more usual. During the dive they will use their wings as rudders to control their direction, tucking their wings in at the last moment just before they hit the water.

Their velocity can carry them 5 metres below the surface of the water. They can additionally swim a further 15 metres to hunt down prey. They will swallow the fish while still underwater instead of surfacing and carrying it away.

They are also known to follow fishing vessels like gulls do in order to pick fish out of the nets or pick up any refuse left behind.

How fast do Northern Gannets fly?

Northern Gannets can reach flying speeds of up to 65 km per hour.

Northern Gannet flocks have been known to return to the same breeding sites for hundreds of years. The biggest colonies contain tens of thousands of nests.

The oldest birds tend to return to the breeding ground first. The time of year that the breeding season occurs in depends on the location of the grounds. For example the birds that choose Bass Rock as their grounds (a location off the coast of Scotland) breed at the end of January while those in Iceland tend to breed around March or April.

Northern Gannets reach sexual maturity around four years of age. Juvenile birds that join the rest of the flock at the breeding grounds may make a nest of their own at the fringes of the site or take over other nests, but they will give up the nests if an older member of the flock comes to claim it.

The nests are generally constructed by the males, made from seaweed and any other materials found floating on the water. The nests are about 50 to 70 centimetres in diameter and will require maintenance throughout the season due to erosion from the wind.

Same-sex fights can break out during the season. The male fights can be especially aggressive and can result in broken necks and wings.

Females soar over the grounds searching for a suitable mate. Males will display by shaking their heads back and forth. Once mated the birds usually remain monogamous for years, if not the rest of their lives.

One egg is laid, weighing about 100 grams. If the first egg is lost then a second will be laid. The incubation period takes 6 or 7 weeks.

Once hatched, the hatchling is fed regurgitated food for the next 3 months. Adult birds that are searching for feed for their young have been known to fly as far as 320 km away from their nesting site.

After the 3 or so months the chick is strong enough to glide down to the water from the nest on their own. They are now on their own, permanently separated from their parents.

Their fat reserves are enough to keep them alive for the next 2 or 3 weeks while they earn to tend to themselves. Initially brown, the juvenile birds will take three or so years before they have grown in their fully white plumage.

How long do Northern Gannets live?

Northern Gannets live about 35 years in the wild.

How many Northern Gannets are there today?

Do Northern Gannets have any natural predators?

1. The Northern Gannet is the largest member of the gannet family.

2. Northern Gannets secrete a water-impermeable oily fluid from subaceous glands. They spread the oil across their feathers with their heads and beaks.

3. Northern Gannets are not particularly good at walking. This means they are better at taking off into flight from the water than from land. They do this by facing into the wind and vigorously flapping their wings to produce the necessary lift. This can cause problems for them on especially wavy days which can see them ending up beached.

4. Northern Gannets have tiny airbags under their skin that they use to help them return to the surface after a dive.

5. Northern Gannet females are much choosier than the males when hunting. They will take longer to choose their foraging area, and will dive deeper and longer on average per dive.

6. Northern Gannet migrations have taken them as far south as Ecuador.

7. The term “gannet” has become synonymous with “glutton” in the U.K. due to the bird’s huge appetite. 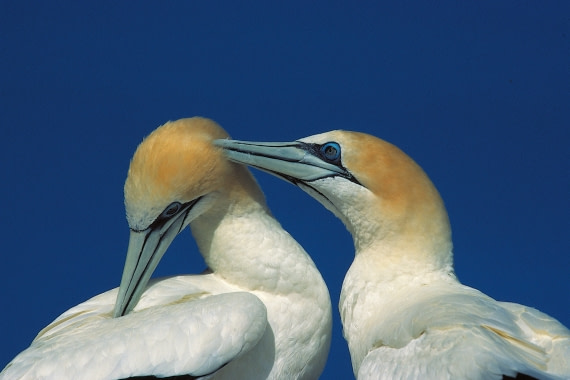 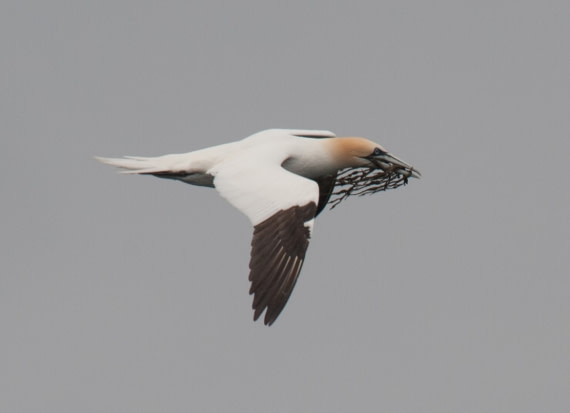 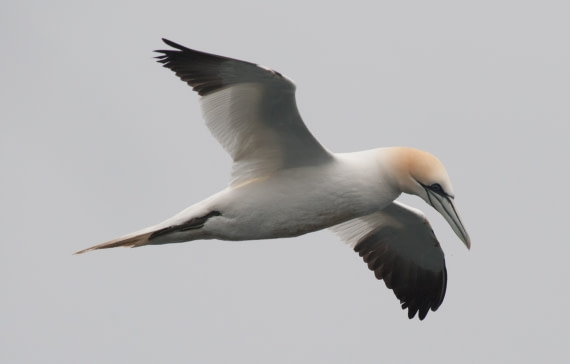