Also known as the common seal, this earless “true seal” is widely distributed in the coastal waters of the Pacific, Atlantic, Baltic, and North Sea

How do harbor seals hunt?

Though harbor seals like to rest in familiar sites, they might spend days at sea in search of food. They travel up to 50 km (30 miles) for this, even swimming up freshwater rivers. Harbor often gather in bays, harbors, bays, estuaries, and sandy intertidal zones in pursuit of salmon, anchovy, menhaden, sea bass, and other fish. Sometimes they also eat crabs, shrimp, squid, and mollusks. Harbor seals are mostly coastal, thought they have been recorded diving to depths of over 500 meters (1,640 feet). They have also been known to attack and eat several species of duck.

Adult harbor seals tend to be solitary, unlike most pinnipeds, rarely interacting other than to mate.

How fast are harbor seals?

Harbor seals can swim up to about 19 kph (12 mph), usually when fleeing predators. They cruise at lower speeds, and their land speeds are of course significantly less.

Harbor seal mating rituals are not clearly known, though researchers have observed that adult males do gather underwater, turn on their backs, put their heads together, and send out vocal signals to attract females. Harbor seals are thought to be polygamous. Females reach sexual maturity around 3.72 years on average, give birth once a year, and gestate about nine months. Harbor seals court and mate underwater, though pups are birthed on shore from February to July, depending on the latitude. Single pups are able to swim and dive within hours.

How long do harbor seals live?

How many harbor seals are there today?

Do harbor seals have any predators?

Yes, harbor seals, like many other seals, have been known to attack people.

RVR24-23 The North Spitsbergen cruise sails to some of the remotest locations of northern Europe. The expedition gives you the opportunity to spot historic whaling remains, glaciers, a variety of Arctic birds including the Little Auk, and polar bears. 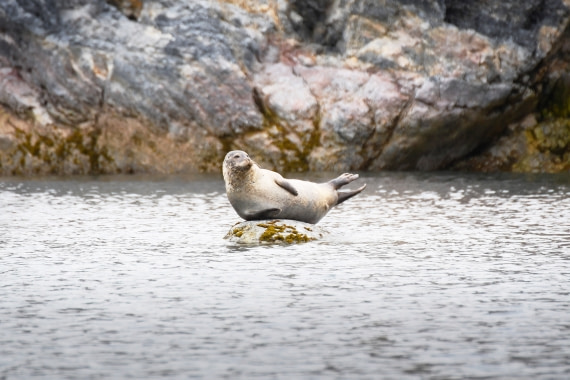