One of three species of birds that breed only in Antarctica, these water-runners are the only member of the Pagodroma genus

How do snow petrels feed?

Most of a snow petrel’s fishing is done close to the surface, with only shallow dives being used for pursuit.

Snow petrels are social in that they form breeding colonies, and in the off season hang out on ice floes in flocks, that number in the hundreds. However they do not form immense colonies like some other birds that can number into the thousands or even millions.

How fast do snow petrels fly?

Snow petrels can reach speeds of up to about 40 km per hour.

Snow petrel birthing colonies are found along cliffs, mostly near the coast although some colonies do venture further inland. While some birds remain at the colonies the year round most arrive at the colonies between the middle of December and the beginning of November.

Females will select a male on his ability to keep up with her aerial acrobatics.

Once paired, snow petrels remain with the same mate for life. They build their nests by lining small depressions in rock crevices with pebbles. The nest sites are usually chosen with some kind of rock overhang. One egg is laid around the beginning of December.

The egg is incubated from 40 to 50 days. Once hatched, the chick is brooded for another week. The juveniles will fledge (take their first flight) anywhere from the end of February through the middle of May.

How long do snow petrels live?

Snow petrels live up to about 20 years in the wild.

How many snow petrels are there today?

There are over 4 million snow petrels alive today.

Do snow petrels have any natural predators?

Snow petrel chicks and eggs are taken by skuas.

1. Snow petrels are the only members of the Pagodroma genus.
2. The snow petrel is one of the three species of birds that breed only in Antarctica.
3. Snow petrels have the southern-most breeding distribution of all birds.
4. Snow petrels are an example of certain kinds of birds that produce oil in their stomach that can be used to A) feed themselves on long flights, B) feed their young, or C) be sprayed out at predators as a form of defence.
5. Like many other seabirds, snow petrels have a gland above their nasal passage that excretes a saline solution. This helps them balance the amount of salt in their body because of all the salt they consume while eating from the sea.
6. There are two subspecies of snow petrels: 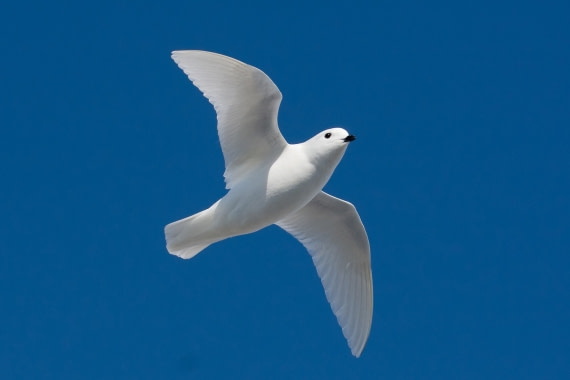