Explore this bird-filled volcanic island by boat and boot

The Norwegian island of Jan Mayen is a popular Arctic landing site due both to its abundance of birdlife as well as its rather immense volcano. Our voyages seek to touch down in southern Jan Mayen, either at the shores of Hvalrosbukta or the settlement-station of Olonkinbyen. On Jan Mayen you might see Brünnich’s guillemots, little auks, glaucous gulls, and various other seabirds. The active volcano of Beerenburg will also make an impression: This ice-capped addition stands 2,277 meters (7,470 feet) tall and is typically the first thing you’ll see, assuming it’s not steeped in clouds.

Jan  Mayen is made up of two areas joined by an isthmus. The southwestern part, Sør-Jan, is relatively flat, narrow, and free of glaciers. The meteorological station, radio center, airstrip, and living quarters of Jan Mayen’s research population are located here. Nord-Jan, the northeastern portion of Jan Mayen, is where Beerenburg stands, a naturally more dramatic area in terms of ice and terrain. Beerenburg, which has erupted three times since 1970, is a Dutch word meaning “Bear Mountain.” It was named by 17th century Dutch whalers, who encountered many polar bears in the area. 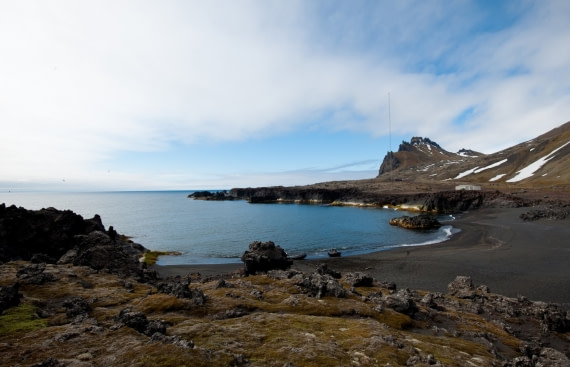