The massive extension of a mammoth Antarctic glacier

From David Glacier to the Drygalski Ice Tongue

It’s only fitting that the Drygalski Ice Tongue be a mouthful to pronounce, based both on what it is as well as its impressive dimensions: This 70 km-long (43 miles) extension of ice ranges anywhere from 14 to 24 km wide (9 to 15 miles), unfurling itself into the ice-spackled waters of the Ross Sea like the enormous tongue of some long-dead dragon. Drygalski originates from one of Victoria Land’s most colossal ice masses, the well-known David Glacier, and lies in the northern waters of McMurdo Sound, about 240 km (150 miles) north of Ross Island, intersecting Scott Coast.

Captain Robert Scott discovered the ice tongue in January of 1902, naming it after Erich von Drygalski, a German professor Scott knew who was also exploring Antarctica at that time. This was during Scott’s British National Antarctic Expedition of 1901—1904, more commonly known as the Discovery Expedition, the first British exploratory voyage into Antarctica since James Clark Ross led voyages there sixty years prior. The Drygalski Ice Tongue is thought to have already been about 4,000 years old by the time it was first charted.

What’s new with Drygalski (and where we see it)

The enormous B-15A iceberg, measuring 3,000 square km (1,200 square miles), struck the Drygalski Ice Tongue between March and April of 2005, breaking off two pieces with surface areas of about 70 square km (27 square miles) each. B-15A was a fragment of the even-larger B-15 berg, which calved from the Ross Ice Shelf in 2000. Later in 2006, another iceberg named C-16 came from the Ross Ice Shelf and also hit Drygalski, producing a shard of more than 100 square km (39 square miles). We see the Drygalski Ice Tongue during our Ross Sea voyages, some of which include helicopter tours. 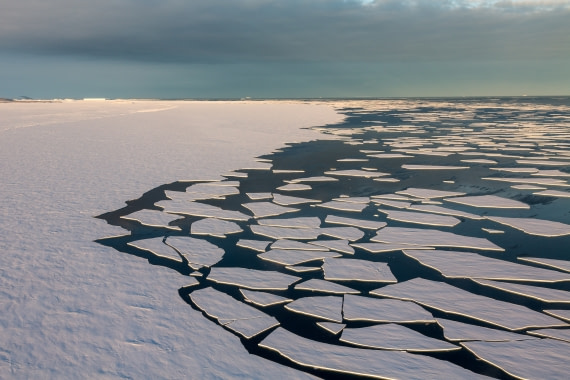