Kulusuk has gone by a few names over the years. The island, located off of southeastern Greenland, was once known as Qulusuk, and before that the Danes called it Kap Dan.

The Dorset settlers left the area, perhaps because of its remoteness. Whatever the cause, the Thule people (Proto-Inuits), who passed through the area in the 1600s, found the coast deserted.

Kulusuk itself wasn’t truly founded until 1909, a year after a Danish ship ran aground and constructed a church on the location from their ship’s timbers.

Today Kulusuk is remarkable both for its blending of European and Inuit cultures, and its colourful contrasts – brightly painted houses stand out against green hills, dark rocky mountains rise in the distance, and blue white ice bergs sail by.

Greenland cruise passengers can hike up from the shore of Kulusuk to the top of the 300 metre tall hill known as Isikajia Mountain, giving yourself a jaw-dropping view of the ice bergs, the settlement, and the stunning fjord system curling its way along the shores. 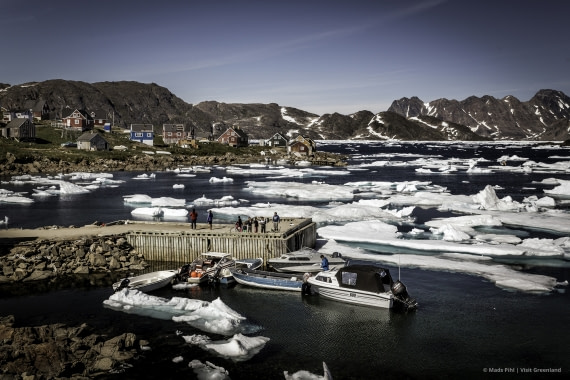