Weddell Sea and its history

Weddell Sea and its history reizen

The Wedell Sea was discovered in 1823 by the British sealer James Weddell. It was in this sea that Shackleton’s ship, the Endurance got trapped and was crushed by ice in 1915. After 15 months on the pack-ice Shackleton and his men managed to reach Elephant Island and finally safely returned.

Otto Nordenskiöld was the leader of the 1901-1904 Swedish Antarctic Expedition. It was in the Weddell Sea where Nordenskiöld’s team of four men wintered at Snow Hill Island. The relieve ship became beset in ice and was finally crushed. The crew managed to reach Paulet Island where they wintered in a primitive hut. Nordenskiöld and the others finally rendezvoused at Hope Bay where they were picked up by the Argentine Navy. All but one survived. Evidence of this remarkable expedition can still be seen.

Is named after the expedition ship of Otto Nordenskiöld. The sound that separates the tip of the Antarctic Peninsula from Dundee Island is also named “ice-berg Alley”, because of the huge ice-bergs that are often seen here.

Located east of the Antarctic Peninsula. It is almost completely snow-capped, hence its name. In 1902 the Swedish Antarctic Expedition under Otto Nordenskiöld built a cabin on the island. Nordenskiöld and three members of the expedition had to spent two winters here, the first planned, the second not planned. 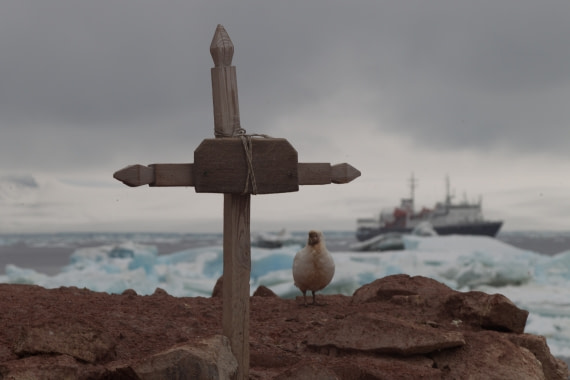