Appearance: Dark grey face and chin, black back with an off-white stripe splitting down to the sides. White “armpit” behind the pectoral fin. White belly. Small and pointed flippers and tail fin, with a notch in the middle of the tail fin. Short and rounded snout. Sickle-shaped dorsal fin.

How do Peale’s Dolphins feed?

Peale’s Dolphins generally feed in groups of up to about 30. However they may form pods of up to 100 individuals that use group herding to take on large schools of fish. They are quite often associated with kelp beds.

Peale’s Dolphins usually swim in pods of 5 to 20 individuals. They do join larger groups of up to 100 individuals during the summer and autumn, but this is a fairly rare occurrence.

Often seen in the company of other species of dolphin, Peale’s Dolphins can be seen bow-riding or wake-surfing around boats and ships.

Peale’s Dolphins breeding season occurs from October through April. They usually give birth to a single calf after a gestation period of 10 to 12 months. Calves measure about 1 metre in length. The calf will feed on its mother’s milk for up to 1 ½ years.

How long do Peale’s Dolphins live?

Dolphins in general live an average of 25 years in the wild, topping out at 40 years. There is insufficient information specific to Peale’s Dolphins.

How many Peale’s Dolphins are there today?

There are no official estimates of Peale’s Dolphin populations.

Do Peale’s Dolphins have any natural predators?

There isn’t enough information available to tell if Peale’s Dolphins have any significant natural predators. However they are in constant danger from fishing expeditions and pollution.

Experience the best of the sub-Antarctic

JNS21-22 Few places compare to South Georgia in terms of exotic wildlife and jaw-dropping scenery, and the Falklands are no different. On this exploratory voyage you can enjoy both, possibly touring the world’s largest black-browed albatross colony while also... 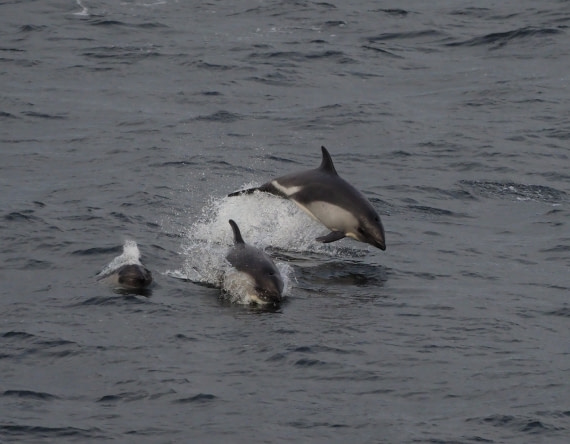