Around Spitsbergen - In the realm of Polar Bear & Ice

98 photos of trip
in the gallery »

N.B. The chances that we can complete a full Spitsbergen circumnavigation (based on our experiences from 1992 – 2019) are about 30% in the first half of July, 70% in the second half, 90% in the first half of August, and 95% in the second half. In case we cannot complete a full circumnavigation, we may devise a program in northeast or southeast Spitsbergen. All itineraries are for guidance only. Programs may vary depending on ice, weather, and wildlife conditions. Landings are subject to site availabilities, permissions, and environmental concerns per AECO regulations. Official sailing plans and landing slots are scheduled with AECO prior to the start of the season, but the expedition leader determines the final plan. Flexibility is paramount for expedition cruises. The average cruising speed of our vessel is 10.5 knots.

Take a cruise around Spitsbergen and explore the icy waters of the North Atlantic. This special expedition offers you the chance to catch site of whales, reindeer, Arctic foxes, walruses, seals, and the star attraction, the polar bear.

Ever wanted to join a course that teaches useful and effective kayaking skills? Now you can learn from the experts, and all in a fantastic Arctic environment. We’re offering our new Kayak Skills Progression Camp, in cooperation with TRAK, to an exclusive group of four to eight kayakers. Participants will be split into two groups of four people, and each group will be offered one outing per day (morning or afternoon) of one to two hours (weather permitting). We hope for five activity days from Sunday to Thursday, depending on local conditions.

The supplemental fee for this activity covers your use of industry-leading TRAK single-seater kayaks and dry suits for the duration of your trip, but if you have your own dry suit, we recommend using that instead. For kayakers who bring their own TRAK kayak and dry suit, no supplemental fee will be charged. Basic kayaking experience is helpful but not a requirement.

Physical fitness, however, is essential. Since it can be breezy and cool in the early season (Arctic springtime), please bring your own thermal layers for additional warmth. This course is aimed at beginners and intermediate kayakers who want to kayak in sheltered fjords, bays, and small secluded harbors. It’s a fun activity in a leisurely format, focusing on education and skills progression. Morning kayakers will return for lunch aboard the vessel at midday, after which they’ll swap activities with morning hikers.

All kayak outings will operate under the guidance of seasoned kayak guides who will take into account the experience and physical fitness levels of the participants. Kayak groups will also be escorted by one Zodiac boat for added safety. Kayaking routes cannot be determined in advance because local conditions will have an influence on the final program.

The map therefore outlines a possible but not final itinerary, as all itineraries are subject to change.

Heading north along the west coast, you arrive by morning in Krossfjorden. Here you might board the Zodiacs for a cruise near the towering blue-white face of the Fourteenth of July Glacier. On the green slopes near the glacier, colorful flowers bloom while flocks of kittiwakes and Brünnich’s guillemots nest on the cliffs. You have a good chance of spotting an Arctic fox scouting for fallen chicks, or a bearded seal paddling through the fjord.

In the afternoon you sail to Ny Ålesund, the northernmost settlement on Earth. Once a mining village served by the world’s most northerly railway – you can still see its tracks – Ny Ålesund is now a research center. Close to the community is a breeding ground for barnacle geese, pink-footed geese, and Arctic terns. And if you’re interested in the history of Arctic exploration, visit the anchoring mast used by polar explorers Amundsen and Nobile in their airships, Norge (1926) and Italia (1928).

When the edge of this sea ice is tens of miles north of the Seven Islands (mostly in August), you can spend a second day in this area. Alternatively (mostly in July) you may turn to Sorgfjord, where you have the chance to find a herd of walruses not far from the graves of 17th-century whalers. A nature walk here can bring you close to families of ptarmigans, and the opposite side of the fjord is also a beautiful area for an excursion.

Today you sail into Hinlopen Strait, home to bearded and ringed seals as well as polar bears. At the entrance there is even the possibility to spot blue whales. As with Liefdefjorden, you can take an alternate west Spitsbergen route if ice prevents entry into Hinlopen. After cruising among the ice floes of Lomfjordshalvøya in the Zodiacs, you then view the bird cliffs of Alkefjellet with their thousands of Brünnich’s guillemots. On the east side of Hinlopen Strait, you may attempt a landing where reindeer, pink-footed geese, and walruses are likely sights. Near Torrelneset you can also visit the polar desert of Nordaustlandet, next to the world’s third-largest ice cap. Here you may encounter walruses during a coastline hike over the area’s raised beaches.

The plan is to make landings in Freemansundet, though polar bears sometimes make this impossible. Potential stops on Barentsøya include Sundneset (for an old trapper’s hut), Kapp Waldburg (for its kittiwake colony), and Rindedalen (for a walk across the tundra). You might also cruise south to Diskobukta, though Kapp Lee is more likely your destination. On Kapp Lee is a walrus haul-out, Pomor ruins, and the chance for hikes along Edgeøya.

Day 8: Land of the Pointed Mountains

You start the day by cruising the side fjords of the Hornsund area of southern Spitsbergen, taking in the spire-like peaks: Hornsundtind rises 1,431 meters (4,695 feet), and Bautaen is a perfect illustration of why early Dutch explorers named this island Spitsbergen, meaning “pointed mountains.” There are 14 sizable glaciers in this area as well as opportunities for spotting seals, beluga whales, and polar bears.

Today you find yourself in Bell Sund, one of the largest fjord systems in Svalbard. The ocean currents make this area slightly warmer than other areas in the archipelago, which shows in the relatively lush vegetation. Here there are excellent opportunities to enjoy both history and wildlife. A possibility is Ahlstrandhalvøya, at the mouth of Van Keulenfjorden, where piles of beluga skeletons can be found. These remains of 19th-century whale slaughter are a haunting reminder of the consequences of rampant exploitation. Fortunately, belugas were not hunted into extinction, and you have a good chance of coming across a pod. Alternately, while cruising the side fjords of Bellsund, you can explore tundra where reindeer like to feed as well as rock slopes where little auks are breeding.

The Bird Cliffs of Alkefjellet 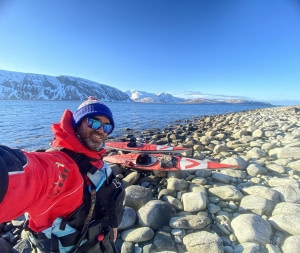 There will be no supplement for kayakers who bring their own TRAK kayak and dry suit. This course is aimed at kayakers with previous kayak experience. Physical fitness is essential. 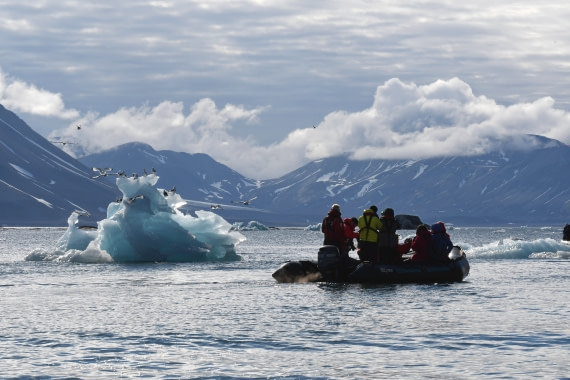 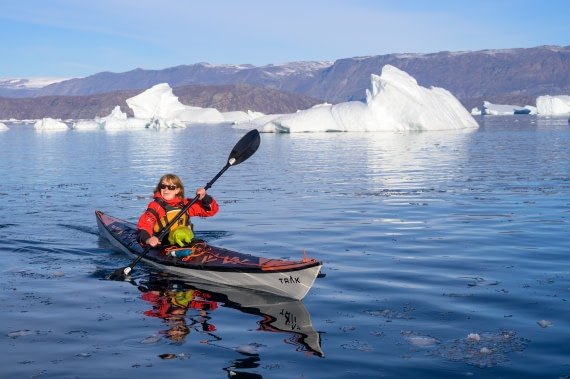 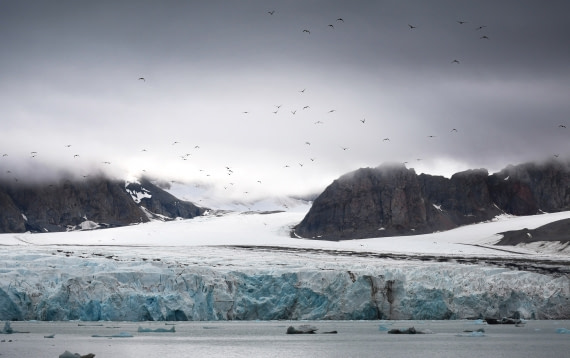