The warmth of their nesting instinct belies the darkness of their name, though that doesn't keep these night hunters from feeding during hours competition is at a low

Location: Wetlands throughout the world except Polar Regions.

Appearance: Black crown and back, white belly, white or yellow face, red eyes, yellow legs, and long white plumes on back of head.

How do Black-crowned Night Herons feed?

Black-crowned Night Herons will stand still either at the edge of water or in shallows and wait to ambush their prey.

They may attract fish by dipping their bill into the water and vibrating it rapidly, creating a disturbance in the water that mimics motions made by prey of the fish.

Once they have caught prey, they shake their head rapidly, much like dog, until the prey is stunned or killed. Being opportunistic eaters, they’ll also eat carrion, almost any kind of small animal, plant materials, and garbage at landfills.

Black-crowned Night Herons tend to hunt on their own, but during the day will nest together in colonies. Colonies can have up to 12 nests in a single tree. These colonies have been known to carry on for more than 50 years.

Black-crowned Night Herons can fly up to 55km per hour.

Black-crowned Night Herons mature sexually around 3 years of age. They nest in colonies made up of sticks placed in the branches of trees, or on the ground if the area is sheltered from predators like an island or beds of reeds.

The male gives out a hissing sound to attract females. He will also put on physical displays that include bowing and raising the long white plumes at the back of his head.

The male will start to build a nest, and once he’s found a mate, will continue bringing building materials while the female takes over the actual building duties.

The female lays from 3 to 8 eggs. Both adults take turns incubating the eggs and caring for the chicks. The chicks leave the nest after about 1 month.

They will not be able to fly for another couple of weeks, so they walk through the vegetation, joining up with their flock at night when they come down from the colony to hunt.

Black-crowned Night Herons live for about 20 years in the wild.

How many Black-Crowned Night Herons are there today?

There don’t appear to be any real studies of Black-crowned Night Heron populations, possibly due to their nocturnal hunting habits and tendency to hide themselves away during daylight hours.

Do Black-crowned Night Herons have any natural predators?

Black-crowned Night Herons don’t have any particular natural predators thanks to the placement of their colonies high in trees, although the young are vulnerable to various predators on the ground before they’re able to fly. 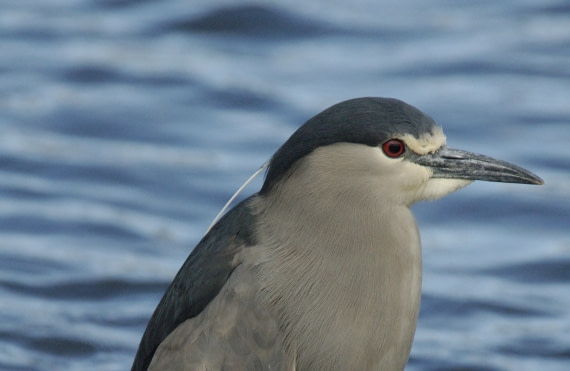