In Search for the Emperor Penguin

In Search for the Emperor Penguin cruises

Go off the beaten tourist track The Emperor Penguin colonies are located in the South of Antarctica, in areas that are most of the year blocked by ice.

Our expedition vessel m/v Ortelius has a very high ice-class and is suitable to operate in the ice of the Weddell Sea and Ross Sea. Although we may not be able to reach the Emperor penguin rookery of Snow Hill Island in the Weddell Sea (less than 50 % chance) we have good chances to observe individual emperors on the edge if the pack-ice. We carry two helicopters on board in our attempt to locate individual Emperor penguins, floating north on the ice-floes.

In search of the Emperor Penguin

Our Ross Sea voyage is a very beautiful journey but also a long and more expensive one. We therefore also offer short voyages with helicopters to offer beautiful scenic flights and to visit fantastic locations otherwise inaccessible so early in the season.  Individual Emperor penguins have been found during all of our previous Weddell Sea voyages and the helicopters give us the best opportunity to spot those beautiful creatures. And if the ice-conditions are favorable (but based on our previous trips in the last three seasons, the chances are less than 50 %) we will proceed to Snow Hill Island to offer helicopter transfers to the Emperor penguin rookery of 4,000 breeding pairs.

As the Emperor Penguin lives so far south in Antarctica, do I need to book a very long and expensive voyage in order to be able reach them?

Do helicopters not disturb the wildlife?

Helicopters could disturb wildlife but this is of course not what we want, and it is even prohibited to disturb any wildlife in Antarctica. We therefore stay away from any wildlife with our helicopters and land on the pack-ice, far enough away from animals to prevent any disturbance. A short walk from the helicopter landing site to the rookery therefore needs to be made.

How often do we fly in the helicopters?

On every voyage we plan several occasions for passengers to make helicopter flights. How often this will be depends mainly on the weather conditions and will be decided upon during the voyage by the captain, expedition leader and helicopter pilots.

How close will we get to the Emperor's?

The plan is to see the Emperor Penguins from a short distance. Still we do respect the wildlife and do not want to disturb it. Therefore we follow the regulations of the IAATO, the International Association of Antarctica Tour Operators. These regulations are quite strict but in this way we are sure not to have a negative influence on the animals.

Will I get seasick?

Many people ask us if they will get sea-sick. This depends very much on the individual. Not everybody is prone to sea-sickness, our experience is that only a small percentage of the passengers get sick on any trip and most of these people are fine after a day or so at sea. If you feel that you are particularly susceptible to sea-sickness then it is a good idea to talk to your local doctor. Bring enough motion sickness tablets, or plasters with you and be sure you have eaten enough and feel rested. Please note: on our sailing-vessels there is no doctor on board.

Do I need special Antarctic clothing?

As it can be quite cold in the Weddell Sea and Ross Sea, warm clothing is essential. Waterproof trousers and jacket against wind, rain and salt spray coming into the zodiac. Furthermore thermal underwear, fleece jackets, warm gloves and a warm hat. A down-jacket will make a stay on the ice near the penguin colony more comfortable. Rubber-boots for the landings are also needed but are provided on board. Feel free to have a look at our packing list.

OTL23-22 A true expedition, our Weddell Sea cruise sets out to explore the range of the Emperor Penguins near Snow Hill Island. We will visit the area via helicopter and see a variety of other birds and penguins including Adélies and Gentoos. 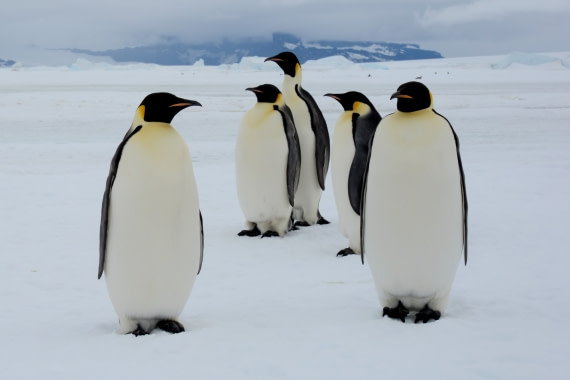 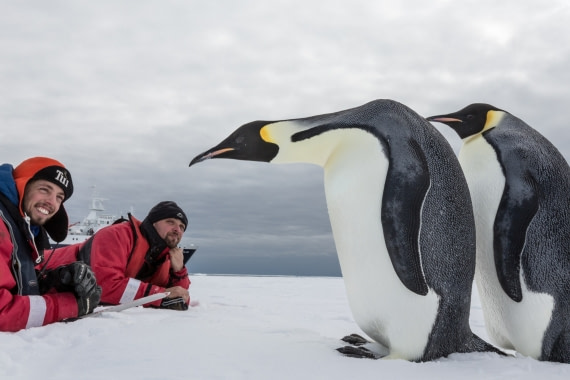 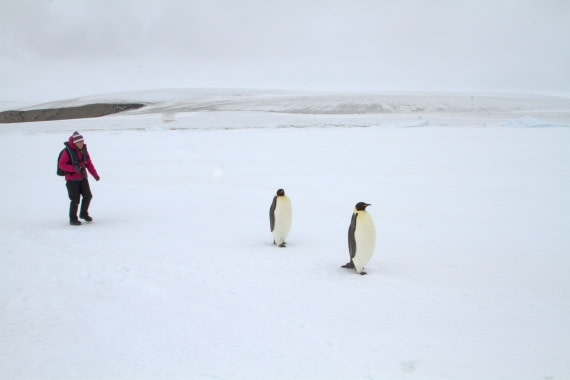