Also known as Kongs Fjord or King’s Bay, Kongsfjorden is an inlet with the Kronebreen and Kongsvegen found at the head of the fjord.

Also known as Kongs Fjord or King’s Bay, Kongsfjorden is an inlet (a narrow and usually small bay) with the Kronebreen and Kongsvegen found at the head of the fjord. Kongsfjorden’s southern shore is home to one of the only four permanent settlements found on Spitsbergen, the former coal-mining town of Ny-Ålesund.

Back in 1610 the bay was found by British explorer (and British whaling-industry pioneer) Jonas Poole who was on the lookout for fresh sealing and whaling sites. His name for the site, Deer Sound, would later be replaced by the name Koninks Bay by explorers around 1710, and this name would be kept by William Scoresby (another British Arctic explorer) who named it King’s Bay in 1820.

Down on the ground and in the sea Arctic cruise passengers have a good chance of spotting out bearded seals, ringed seals, and small herds of reindeer. Whales are also known to frequent the surrounding waters.

History-buffs are able to visit a number of protected historical sites including hunter and trapper cabins dating back to the early 1900s. Evidence of past Russian Pomor (hunters) camps and graveyards also still litter the grounds.

If you’re interested in checking out the quiet beauty of Kongsfjorden join us for one of our Spitsbergen cruises.

RVR23-22 The North Spitsbergen cruise sails to some of the remotest locations of northern Europe. The expedition gives you the opportunity to spot historic whaling remains, glaciers, a variety of Arctic birds including the Little Auk, and polar bears.

We have a total of
43 cruises 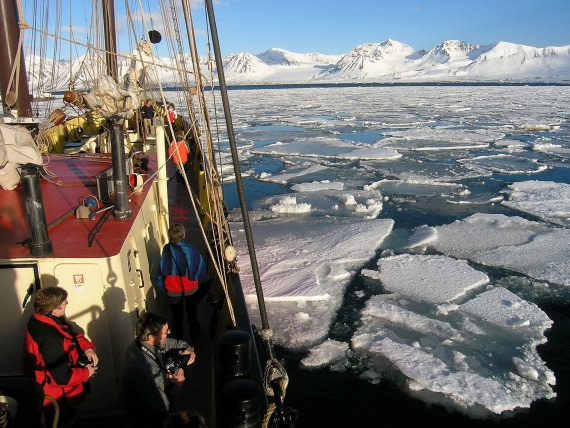