Named for their hooded nasal cavities, these territorial pinnipeds tend to defend their homes more forcefully than others of their family

Location: North Atlantic and Arctic Oceans. They can migrate as far south as the Caribbean outside of the breeding season.

How do Hooded Seals feed?

Hooded Seals generally dive to depths of around 100 to 600 metres for up to 15 minutes at a time. However they have been recorded going as deep as 1000 metres for an hour.

Hooded Seals are solitary and will chase other seals out of their territory. They only come together during mating season.

How fast do Hooded Seals swim?

Hooded Seals can burst up to speeds approaching 27 km per hour.

Hooded Seal males become sexually mature at around 6 years of age while females mature anywhere from 3 to 6 years.

Breeding season is during the spring. The Seals are generally only at their breeding grounds for 2 or 3 weeks during which time pregnant females deliver (after an 11 month pregnancy) and new mating occurs. They will linger long enough to molt and then they head off to their annual migration.

Hooded Seal males display their sexual availability by inflating their hood (located at the nose and extending up to the top of their head when inflated) that resembles a pinkish balloon. It’s also an aggressive signal to other males to back off.

Hooded Seal pups measure about 1 metre long and 25 kg at birth. They are weaned after only 3 to 5 days, having gone from 25 kg to up to 45 kg in that span of time thanks to their mother’s milk.

How long do Hooded Seals live?

Hooded Seals live up to 35 years.

How many Hooded Seals are there today?

Do Hooded Seals have any natural predators?

Hooded Seals are prey for Killer Whales and Polar Bears. 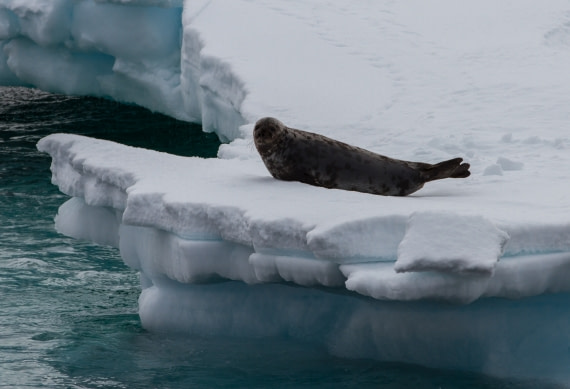