Appearance: Glossy black feathering, with a white neck and belly, and a black crest on the top of the head during the breeding season. Blue ring around the eyes. Legs and feet are pinkish-orange. An orange-yellow nasal bob above a serrated bill.

How do King Cormorants feed?

King Cormorants prefer to feed near shore but will travel long distances in their efforts to spot out crustaceans or schools of small fish. They snatch up their prey by making dives of up to 25 metres on average.

King Cormorants will feed in flocks. Their breeding colonies are usually quite dense and can be shared with other species of birds.

How fast do King Cormorants fly?

King Cormorants can reach speeds of up to 50 km per hour.

King Cormorants create smallish (usually up to a couple hundred breeding pairs) but tightly-packed breeding colonies on cliff tops or the tops of slopes. Quite often these colonies are mixed in with those of Black-browed Albatrosses or Rockhopper Penguins. Their nests are made up of local vegetation, excrement, and mud.

2 to 4 chalk-blue eggs are laid around November. Both parents share in the brooding of the eggs. The eggs will hatch about a month later, fledging (growing feathers) in February. The young are fed via regurgitation.

How long do King Cormorants live?

King Cormorants have an average lifespan of 15 to 20 years.

How many King Cormorants are there today?

There are an estimated 60,000 breeding pairs found on the Falkland Islands. The world total is hard to estimate while the matter of the subspecies has yet to be settled (see below).

Do King Cormorants have any natural predators?

King Cormorant eggs and chicks are prey for Sheathbills and Skua.

HDS23-22 This cruise delivers you to wondrous landscapes found in one of the harshest environments on Earth. Meet the great stars of the Antarctic, the penguins, found in the thousands in a variety of curious species.

We have a total of
56 cruises 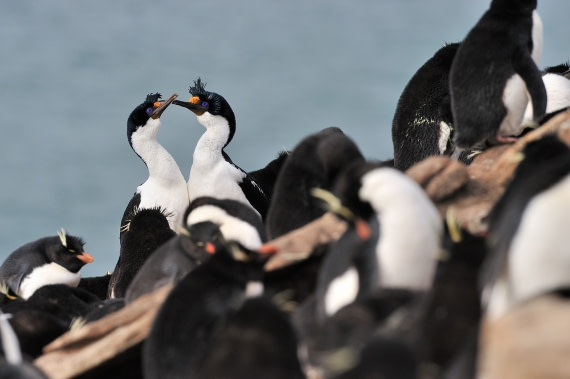