These shrewd “squidhounds” believe in working smart, not hard, sometimes goading whales to swim ahead of them so they can cruise in their wake

Appearance: Short, white beak. Curved dorsal fin. The body is dark gray or black, with white patches, and white or light-colored bands down the flanks.

How do white-beaked dolphins feed?

When hunting surface fish the dolphins may work together to herd the prey fish into smaller areas, making it easier to scoop them up. When foraging alone they will head to the bottom of the water to snack on bottom-dwellers, usually no deeper than 700 metres.

White-beaked dolphins are very social, not only with other dolphins but also with orca, humpback, minke and fin whales, with whom they sometimes group feed. They generally live and travel with groups that number less than 30, but they can join smaller groups into massive groups that number up to 1,500. White-beaked dolphins are playful and curious when it comes to humans, and will approach and play with boats.

How fast do white-beaked dolphins swim?

White-beaked dolphins mature sexually at around seven years of age. Breeding season takes place throughout the summer months, May through September. Since the gestation period is 11 months to a year, mating occurs soon after the birth. Calves are around one metre long (three feet) and weigh around 40 kg (88 pounds).

How long do white-beaked dolphins live?

The life expectancy of white-beaked dolphins is unknown, though dolphins in general live about 40 years in the wild.

How many white-beaked dolphins are there today?

The world population of white-beaked dolphins is estimated to be at least over 100,000.

Do white-beaked dolphins have any natural predators?

The only natural predators that prey upon white-beaked dolphins are orcas and larger forms of sharks. Only in the rarest of circumstances do polar bears prey on these dolphins.

3. White-beaked dolphins are the largest examples of the Lagenorhynchus genus.

4. White-beaked dolphins have been spotted harassing whales to make them swim faster in order to create a wake for the dolphins to swim in.

5. Each dolphin has a slightly different tonal range to its clicks and whistles, allowing other dolphins in the group to understand which one is communicating at the time.

6. The clicks and whistles are able to communicate a wide range of ideas: that a dolphin wants to mate, that there is danger, and that it has found food, for example.

7. White-beaked dolphin pods are sometimes segregated by sex. All-male pods are referred to as an “alliance,” while an all-female pod is a “party.”

OTL01a23 From the wild shores of Northern Norway to the bird cliffs of Bear Island to Svalbard's fantastic Bell Sund fjord system, this wildlife-centered expedition gives you the best of both the lower and higher Arctic. You might encounter blue whales, harp...

OTL01b23 From the wild shores of Northern Norway to the bird cliffs of Bear Island to Svalbard's fantastic Bell Sund fjord system, this wildlife-centered expedition gives you the best of both the lower and higher Arctic. You might encounter blue whales, harp... 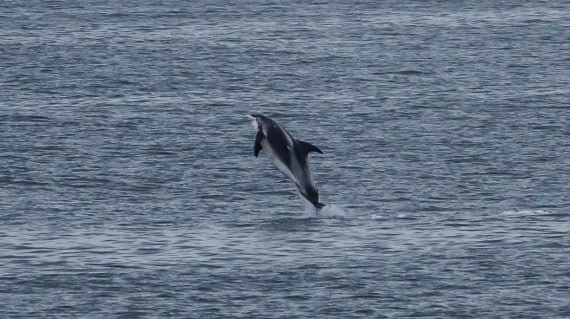