Owing to its sizable penguin colony, this circular Antarctic island is a popular site among polar bird lovers

Paulet Island is located off the northeastern end of the Antarctic Peninsula, lying 4.5 km (2.8 miles) southeast of Dundee Island and measuring 1.5 km (0.93 miles) in diameter. Made up of lava flows, Paulet Island features a cinder cone with a small summit crater. The associated geothermal heat keeps Paulet Island free of ice in many place.

Because Paulet Island is home to an Adélie penguin colony of around 100,000 breeding pairs, it has been designated an Important Bird Area by BirdLife International. Imperial shags, kelp gulls, and snow petrels also nest on Paulet Island, making it a prized landing site for bird photographers and general Antarctic wildlife enthusiasts.

The varied history of Paulet Island

Paulet Island was discovered by the crew of James Clark Ross during the British Antarctic Expedition of 1839 –1843 and named after Lord George Paulet, a British captain. Later in 1903, Swedish explorer Otto Nordenskiöld’s ship Antarctic sunk off the coast of Paulet Island, after which the survivors built a stone hut there. The hut, along with a cairn and grave, have been grouped together as an Historic Site or Monument (HSM 41) on Paulet Island.

PLA29-23 The great Weddell Sea not only features massive tabular icebergs, wildly dramatic landscapes, and fascinating historical sites, but it is also one of the best places in Antarctica for viewing iconic wildlife like whales, seals and many other rarely seen... 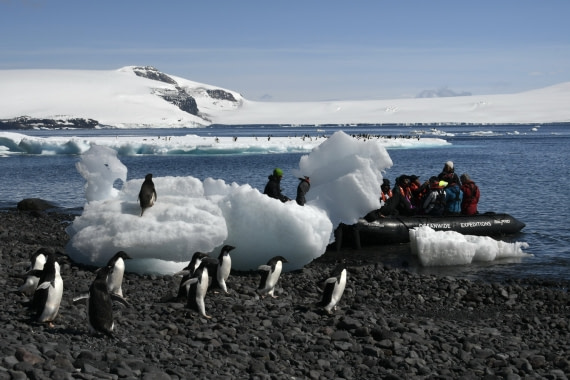